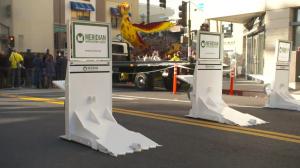 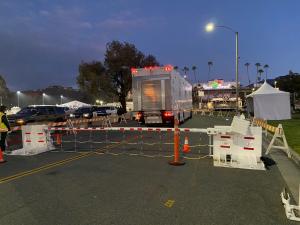 STREET PARADE, INAUGURATION, NASCAR. ALL IN A WEEK’S WORK FOR ARCHER MOBILE BARRIERS

Event organizers know they must create a safe zone for their crowded spaces. Parades, in particular, can be high risk events and that is why so many cities and companies are coming to us now.”
— Peter Whitford, Meridian CEO

PASADENA, CA, US, January 25, 2023 /EINPresswire.com/ -- Meridian Rapid Defense Group had its Archer Barriers and Beam Gates spread far and wide across the U.S. for the start of 2023.

America’s favorite New Year's event, the Rose Parade in Pasadena, CA saw Meridian’s specialists secure the entire five and a half miles of the parade route.

In Florida, the Archer 1200 Barriers created a security cordon for the inauguration of Governor Ron DeSantis, while at the NASCAR Safety Summit in North Carolina the Archer Beam Gate and its ease of use was a big talking point for the attendees.

“We’re certainly off to a busy start for the year,” said Peter Whitford, Meridian CEO. “More than ever these days event organizers know they must create a safe zone for their crowded spaces. Parades, in particular, can be high risk events and that is why so many cities and companies are coming to us now seeking a solution.”

For the inauguration ceremony, Meridian’s Archer 1200 Barriers replaced buses, patrol cars and even garbage trucks used in the past to close off the area. Feedback on the barriers was highly positive because of the ease of movement and effectiveness of replacing those previously unsightly vehicle blockades.

Mr. Whitford explained how many of the attendees at the NASCAR Summit were surprised at how easily and quickly the Archer Beam Gate was erected. “The fact that it needs no plug in power and can be put together and operational within 15 minutes was a real talking point,” he said.

At the Rose Bowl game, attended by more than 80,000 fans, four of Meridian’s Archer Beam Gates were used to control the high level of vehicle traffic entering the pedestrian areas while the Archer barriers were again in place across the entire footprint of the event.

The barriers, made of 700 lbs. of U.S. made steel are highly mobile which really mattered when within minutes of the last float passing in the Rose Parade the streets of Pasadena needed to be reopened quickly. Within an hour the city was again open for business as usual.

This was just the start of a big year for Meridian. The Archer Barriers, with their Homeland Security rating, are now a common sight at sporting events across the U.S. Many NFL, MLB and MLS stadiums are protected by Meridian along with local events such as farmers’ markets and fairs.