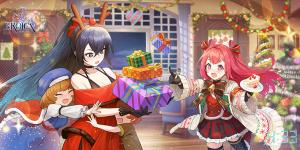 Adventurers can summon new heroes during the Pick-Up Festival, which runs until 1st December.

A new side story event is being added to Eroica called “Holy Night’s Gift Thief.” During the event, adventurers can earn rewards by completing achievements and stages.

Adventurers can also get a daily check-in bonus to celebrate Christmas early.

For Black Friday, exclusive game items will be released after maintenance on the 24th of November. Don’t miss this chance to get season-limited game items.

A new three-star hero Hildegard (Green, Slasher) has been added to the game, and adventurers are able to summon Hildegard during the Pick-Up Festival.

Adventurers can get Hildegard’s exclusive pre-core in the Mileage shop and Pre-core summon during the Festival.

Eroica is a turn-based 3D mobile RPG that offers over forty unique characters. As players board the train to Isekai (a different world), an exhilarating story unfolds.

Eroica is now available as a free download from the App Store and Google Play.