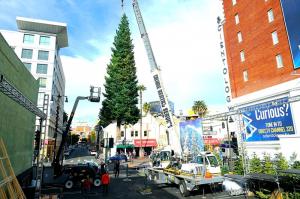 A giant Christmas tree is craned into place on Hollywood Boulevard, signaling the start of the holiday season.

LOS ANGELES, CALIFORNIA, UNITED STATES, November 23, 2022 /EINPresswire.com/ -- In what has become an annual Hollywood tradition, the 2022 Christmas season began November 21 with the arrival of a 6,000-pound Christmas tree for L. Ron Hubbard’s Winter Wonderland. After completing its 540-mile journey from Lake Almanor in Northern California Monday afternoon, the majestic white fir was hoisted into place by a 40-ton crane.

Since 1983, L. Ron Hubbard’s Winter Wonderland has been the holiday home for a massive Christmas tree, and this year is no exception. Winter Wonderland features a Santa house nestled in a forest of evergreens, providing joy to tens of thousands of children and their families every year throughout the season.

Winter Wonderland trees are harvested sustainably using ‘stump culture.’ This is the practice of cutting a tree by leaving the stump with whorls of lower branches. As many as four trees will regenerate in its place.

“Originally, fir trees were lit in celebration of the winter solstice and the promise of a new and brighter life in the coming year,” said Louis Ricketts, Friends of L. Ron Hubbard spokesperson. The group sponsors this special event each year. “In that same tradition, our tree is also a symbol of joy and happiness for everyone.”

Winter Wonderland memorializes Mr. Hubbard’s timeless and universal message of accord: “On the day when we can fully trust each other, there will be peace on Earth.”

Winter Wonderland will open just for the evening, November 27, for the Hollywood Christmas Parade, and will then hold its Grand Opening on Saturday, December 3. Activities will include live entertainment, games for the children, and photos with Santa. Admission is free.

This annual tradition is made possible by the Friends of L. Ron Hubbard and the Church of Scientology Western U.S.

The Scientology Network is available on DIRECTV Channel 320 and can be streamed at Scientology.tv, on mobile apps and via the Roku, Amazon Fire and Apple TV platforms. Since launching with a special episode featuring Scientology ecclesiastical leader Mr. David Miscavige, Scientology Network has been viewed in 240 countries and territories worldwide in 17 languages.